What is Plasma Treatment? 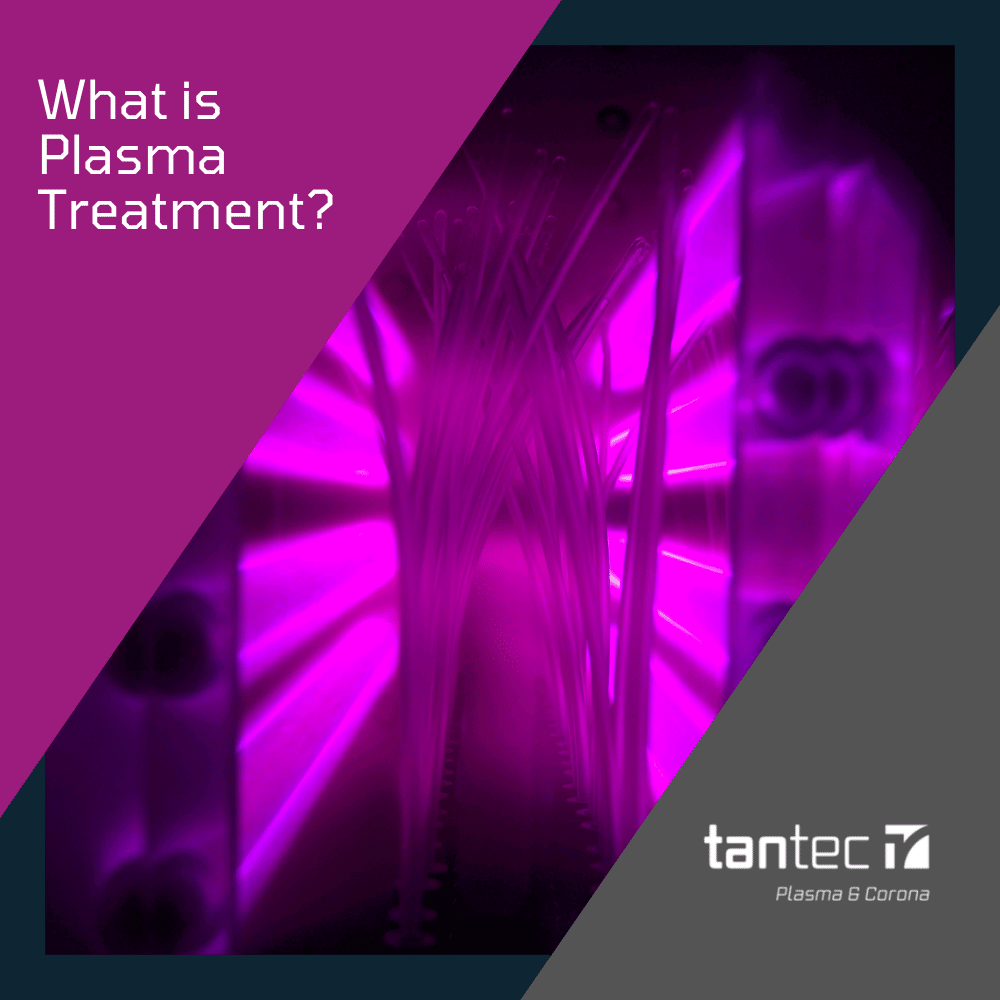 Plasma treatment is a highly-popular form of surface treatment used to activate, clean, coat or etch material surfaces. It is commonly used to treat a variety of materials including plastics, metals and glass.

Plasma is a gas that has been electrically charged with freely-moving electrons in both the negative and positive state. This occurs as a result of additional energy being applied to the gas, causing negatively-charged electrons to break free from the nucleus.

Plasma is the state of matter after gas. As we go from solid to liquid and then liquid to gas, the gas then turns into plasma. In the same way we add energy to a solid to melt it or we add a solid to a liquid to boil it, we add energy to a gas to turn it into plasma. The main difference when solids and liquids change versus when a gas changes to a plasma is that solids and liquids break up between molecules. The molecules themselves stay intact; it’s only their interaction with other molecules that change. When a gas breaks up into plasma, the molecules themselves break up into radicals, ions and other reactive species. It is these components that make up plasma and react with your surface to create an increased surface energy material capable of greater adhesion and interaction with the world around it.

The resulting mixture of neutral atoms, atomic ions, electrons, molecular ions and molecules present in both a negative and positive state balance each other out, therefore a number of these charges are electrically neutral. As a result, the charged particles present in plasma are responsible for it’s high electrical conductivity. All of this internal energy combines and, when interacting with a surface, initiates the formation of plasma.

By selecting a gas mixture and applying it with the right level of pressure and power, the effects of plasma treatment on any surface can be finely tuned and controlled.

The history of Plasma

The term “plasma” was first coined by Irving Langmuir in 1927 to describe ionized gas. The American, who was working in General Electric’s research laboratory, related the way electrified gas carried electrons and ions to the way blood plasma carries red and white cells around the body. As a result of his research, he went on to develop the plasma sheaths theory and discovered Langmuir waves.

How does Plasma treatment work?

Plasma treatments can be performed in an evacuated chamber or enclosure (such as the vacuum plasma process).  Most of the air within the chamber is removed, leaving around 1/1000th of the air we have in a normal room. High voltage is then applied to the remaining molecules which break up to form plasma. Due to there being very few molecules in the chamber, the remaining excited ions, electrons and free radicals can bounce around and hit every surface, doing this very quickly. You can control the level of heat by adjusting the pressure and power of the system; some materials such as metals can benefit from higher temperature plasma to help boil off any oils on the surface, whereas a delicate medical dressing will want as little heat as possible to avoid warping or damage.

Atmospheric plasma is an alternative way of delivering plasma treatment. This involves the use of a powerful jet of energised, compressed air that is directed at the components surface. The plasma is created by revolving a vortex of compressed air around a high-voltage discharge that is then blown out of the nozzle onto the part.  The plasma being discharged from the nozzle can come out quite warm; around 200C which is useful for heavy contamination and moving over resilient parts such as metals with fingerprint or cutting fluid contamination. For delicate materials, the treatment is performed much faster, being able to treat 10 micron thick films without any problems.

Why is plasma treatment an effective pre-treatment?

Plasma treatment is often used as a pre-treatment in preparation for the next stage in the manufacturing process. This could be the application of coatings, high-quality printing or the bonding of materials. Alternatively, it could also be prior to gluing or lacquering. It is a highly effective cleaning process, removing any contaminants present on the surface of the material and sufficiently preparing it for processing. Unless treated, materials such as plastics can often lose any type of printing or coating performed on their surfaces as a result of their glossy texture and poor chemistry for adhesion. Plastics in particular are often more difficult; the fact that they consist of unreactive hydrocarbons means they don’t bond as easily. However, it is not solely plastics and metals that benefit from plasma treatment. Ceramics, composites, powder coatings and glass can also receive effective treatments to improve their performance.

How long do plasma treatments last?

The lifetime of plasma surface treatments vary, depending on the material and specific treatment. Contrary to popular belief, plasma activation doesn’t last forever. It could be anything from minutes to days or even months. At some point though, the material would need to undergo plasma activation again to regain the same results.

Of course, some materials are activated for longer than others, depending on what they are. Plasma surface treatment performed on plastics, for example, can last as long as a couple of months. Specialist surface treatment providers, such as Tantec UK & Ireland, can measure the surface activation lifespan of a material in dedicated testing facilities, utilising expertise in contact angle measurement and test inks. This then helps us to determine the optimum parameters for plasma treatment for our customers.

Experts in plasma treatment since 1974

For nearly 50 years, Tantec UK & Ireland has been one of the leading providers of plasma surface treatment systems across the United Kingdom and Ireland. We’re proud to have developed industry-leading products that support high-technology markets such as automotive, FMCG and medical devices. If you’re looking for an expert partner in plasma surface treatments, contact us today for more information on how we can help you.

How effective is plasma and corona in the cable industry?

Is plasma and corona effective in the cable industry? Whether

How to improve the surface tension of acrylics polycarbonate sheets

It is often necessary to coat sheets as part of

Can Corona improve the production process of plastic lenses?

For this month’s blog, we take a look at how